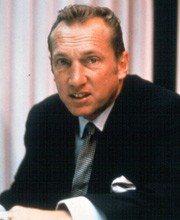 Al Davis was the combative head coach, general manager and owner of the NFL’s Oakland Raiders for nearly 50 years. He built the Raiders in his own tough and rebellious image and stamped them with his personal motto: “Just win, baby.”  Al Davis was born near Boston but grew up in Brooklyn, New York. He graduated from Syracuse University in 1950, served in the Army (where he coached the base football team at Fort Belvoir) and joined the Baltimore Colts as an assistant coach when he was 24. He later moved up through the coaching ranks and joined the Los Angeles Chargers of the newly-formed American Football League in 1960, jumping to the AFL’s Oakland Raiders as both general manager and head coach in 1963. (The AFL and NFL merged in 1970.) In 1969, Davis hired a young coach named John Madden, and that began the long run of Raider successes, including Super Bowl wins in 1976, 1980 and 1983. Davis bought a small part of the team in 1966, and by 1972 he was the controlling owner. A very controlling owner, in fact: Davis was known for prowling the Raider practice fields, calling plays from the owner’s box during games, and clashing with head coaches from Mike Shanahan to Jon Gruden. He also clashed in court with the NFL, moving the Raiders to Los Angeles from 1982-94 and then back to Oakland in 1995. He remained the face of the Raiders right up to his death on the fifth weekend of the 2011 NFL season. Al Davis was inducted into the Football Hall of Fame in 1992.

ESPN noted after his death, “Davis also was a trailblazer. He hired the first black head coach of the modern era — Art Shell in 1988. He hired the second Latino coach, Tom Flores; and the first woman CEO, Amy Trask”… The Raiders uniforms are silver and black; the team logo is a pirate wearing an eye patch and a football helmet, in front of crossed swords… Al Davis married the former Carol Segall on July 11, 1954, according to the Current Biography Yearbook (1985 edition). They had one son, Clark, who was born circa 1955. The Current Biography Yearbook says Mark was named for Gen. Mark Clark, who was the president of The Citadel when Al Davis coached there from 1953-56.

Something in Common with Al Davis