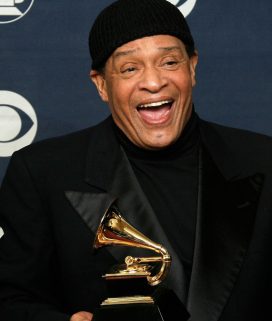 Al Jarreau is 82 years old
Born: March 12, 1940
Birthplace: Milwaukee, Wisconsin, United States
Best known as: The singer of "We're in This Love Together"
Buy from Amazon.com: Music by Al Jarreau

Singer Al Jarreau’s smooth style earned him Grammy awards in three categories: jazz, pop and R&B. His biggest hit was 1981’s “We’re in This Love Together.”

Jarreau began his career in the early 1960s, with a graduate degree and work in rehabilitation centers. Then he moved to San Francisco and tried to make it as a singer.

Al Jarreau landed a record contract with Reprise, and in 1975 released his debut album, We Got By. He followed that the next year with Glow, and in the next decade released ten albums, earning a following as well as being a familiar face at the Grammy Awards.

His biggest album was 1981’s Breakin’ Away, and one of his biggest hits was the theme song to the TV series Moonlighting (starring Bruce Willis and Cybill Shepherd).

Something in Common with Al Jarreau