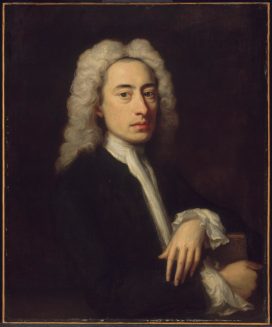 Alexander Pope was called “The Wicked Wasp of Twickenham” for his stinging literary satires of his fellow writers. But Pope also was a poet whose mastery of the heroic couplet has kept him in the canon of English literature since the 18th century.

Largely self-educated, Alexander Pope began writing poetry as a teen and was first published in 1709. An Essay on Criticism, published in 1711, established him as a technically adept and malicious wit, and Pope became a celebrity in London’s literary circles.

His mock-heroic poem The Rape of the Lock (1712-14) cemented his reputation, and his translations of Homer made him financially secure enough that in 1719 he settled in a villa in Twickenham. Pope made a career out of mocking other poets, and his sharp-edged jabs earned him the ‘Wicked Wasp’ nickname.

Pope was undeniably skilled at verse, and his literary reputation has waxed and waned over the years, but his work is generally considered a major influence on English satire. His other works include The Dunciad (1728-42), Moral Essays (1731-35) and Essay on Man (1733).

Alexander Pope is the source of many commonly-used (and often unattributed) quotes, including: “To err is human, to forgive divine,” “A little learning is a dangerous thing,” and “For fools rush in where angels fear to tread.”

Alexander Pope suffered an infection as a child that permanently curved his spine (he stood 4’6″ tall)… Alexander Pope was a Roman Catholic; his spotty education as a youth was due to restrictions against Catholics in Protestant-ruled England… Some other Alexander Pope gems are: “Fools admire, but men approve,” “The proper study of mankind is man” and “Hope springs eternal in the human breast.”

Something in Common with Alexander Pope