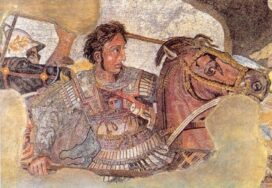 See photos of Alexander the Great

A towering figure in ancient history, Alexander the Great came close to conquering the entire civilized world of his day. The son of King Phillip II of Macedon, Alexander was educated by the philosopher Aristotle and first led troops at age 18. After his father’s death he took command of the Macedonian army, whipped the superpower Persians, and then went on to conquer much of the civilized world. At the peak of his powers, his empire stretched from the western edge of modern-day India across to Egypt (where he founded the city of Alexandria and named it for himself). He died at age 33, after days of fever following a bout of heavy drinking; some suggest he was poisoned, though no cause of death has ever been proved. He was entombed in a golden coffin in Alexandria, where his tomb attracted travelers for centuries.

Alexander the Great’s mother was Olympias, a princess from Empiris in western Greece… His horse Bucephalus is one of history’s famous steeds… Ancient legend claimed that Alexander was the son of the god Zeus.