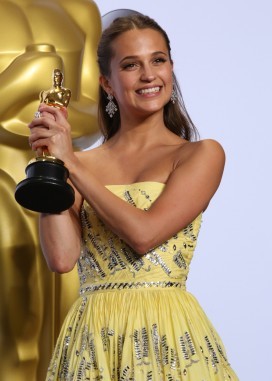 Swedish actress Alicia Vikander had a big year in 2015, appearing in Alex Garland‘s Ex Machina, and then playing an Oscar-winning role in The Danish Girl (opposite Eddie Redmayne).

Alicia Vikander studied dancing as a child and appeared in several stage productions, but in her late teens she turned to acting, appearing in Swedish short films and television programs. She was known to TV audiences for her role in the series Andra Avenyn (2008-10), but it was her film debut in 2010’s Pure that made critics take notice. Internationally, Vikander became noticed when she appeared in the movie Anna Karenina and in A Royal Affair, both in 2012 (A Royal Affair was nominated for an Oscar for Best Foreign Language Film). Critics have since praised her performances, if not all her films, and she’s branched out from arthouse cinema to appear in more mainstream films such as Guy Ritchie‘s The Man from U.N.C.L.E. (2015).

Her performance as Ava, the artificial intelligence at the center of the creepy sci-fi thriller Ex Machina, brought nominations for a BAFTA award and a Golden Globe. In The Danish Girl (2015) she played the understanding but understandably troubled wife of Einar Wegener, a pioneer in sex-reassignment surgery. The role brought her another BAFTA nomination, a Screen Actors Guild award for best supporting actress, and finally, in 2016, the Oscar for best supporting actress.

Something in Common with Alicia Vikander