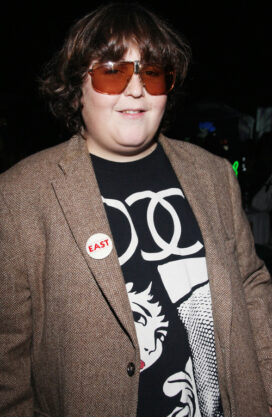 Comedian Andy Milonakis landed his own series on MTV in 2005, thanks in large part to “The Superbowl Is Gay,” a short comedy film he posted on the Internet in 2003. The film, featuring Milonakis performing an impromptu “song” in which pretty much everything — from DVDs to orange juice — is “gay,” made the rounds on the Web and drew attention to other short films he had posted at AngryNakedPat.com. Television personality Jimmy Kimmel took notice and hired Milonakis to do wacky man-on-the-street interviews for Jimmy Kimmel Live, which in turn led to a Kimmel-produced series for MTV, The Andy Milonakis Show. On TV Milonakis appears to be a young teenager whose crude and ridiculous antics celebrate a comedy rooted in immature pranks. In fact, he is much older than he appears, and it’s been said his physical appearance is due to what he has called a “growth hormone thing.” Like American Idol reject William Hung, Milonakis made a name for himself by being an uncommonly bad performer. In 2005 he appeared in the indie comedy Waiting… (starring Ryan Reynolds), and in 2007 he began posting videos on My Damn Channel (Andy the Funniest Man in the World). He also co-starred with Outkast‘s Big Boi in the comedy feature Who’s Your Caddy?

Something in Common with Andy Milonakis