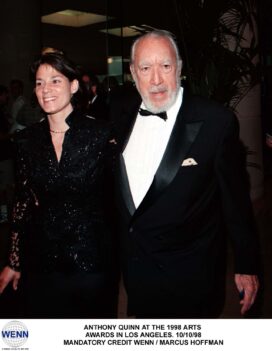 Anthony Quinn’s heyday was the 1950s, when he won two Oscars as a supporting actor: one as the brother of Emiliano Zapata in Viva Zapata! (1952), and another as the painter Gauguin, the friend of Vincent Van Gogh in Lust for Life (1956, with Kirk Douglas as Van Gogh).

In the 1960s Quinn became permanently associated with the title role of the earthy, life-embracing peasant in Zorba the Greek.

While managing a successful screen career, Quinn also made a name for himself as a sculptor and painter. In later years he became notorious for his marital peccadilloes; in all he had five wives and fathered 13 children.

Something in Common with Anthony Quinn