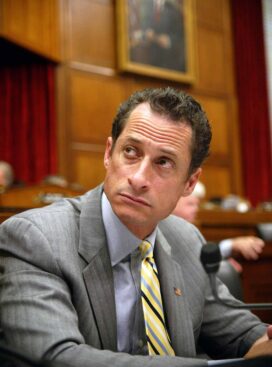 Democrat Anthony Weiner is a New York politician who served in the United States House of Representatives from 1999 until 2011, when he resigned in embarrassment after he was caught sending sexually suggestive photos from his Twitter account.

Raised in Brooklyn, Anthony Weiner studied political science at the State University of New York at Plattsburgh. He graduated in 1985 and went to work for Charles E. Schumer, then a congressman from the ninth district. He left there in 1991 and, at the age of 27, became a member of the New York City Council. When Schumer ran for the U.S. Senate in 1998, Weiner ran for his congressional seat and won.

Weiner ran unsuccessfully for mayor of New York City in 2005, but gained national fame as a congressman through frequent television appearances and fiery speeches on the House floor. In 2010 he married Huma Abedin, a longtime aide to Hillary Clinton; former President Bill Clinton officiated at their wedding.

Weiner’s reputation took a turn in 2011, when it was revealed that a waist-down photo of a man in underpants was sent to a 21 year-old Seattle woman on 27 May 2011 from his Twitter account. The photo was deleted but the damage was done: Andrew Breitbart, a political gossip hound, broke the story that the photo was Weiner himself. After more than a week of denials, Weiner admitted on 6 June that he had, in fact, sent the photo and several others through social media. Around the same time, he announced that his wife was pregnant; their son, Jordan Weiner, was born in December of 2011.

After pressure from his colleagues, Weiner resigned from the House of Representatives on 21 June 2011. He resurrected his political career in 2013 and ran again for mayor of New York City in 2013, only to quit the race when it was revealed that he had continued to send sexual texts under the racy pseudonym of Carlos Danger. (The campaign was the focus of a 2016 documentary, Weiner.)

On August 28, 2016, The New York Post broke yet another story about Weiner, revealing that “while his wife, Huma Abedin, travels the country campaigning for Hillary Clinton, the disgraced ex-congressman has been sexting with a busty brunette.” (Abedin, who had stayed with Weiner throughout the previous incidents, announced on August 29th that she planned to separate from Weiner.)

As it turns out, Weiner was “sexting” many women, as well with a 15 year-old girl. He was charged in 2017 and found guilty of sending obscene images to a minor. Weiner was sentenced to 21 months in federal prison in September of that year. It was announced a year later that he would be released three months early.

Something in Common with Anthony Weiner