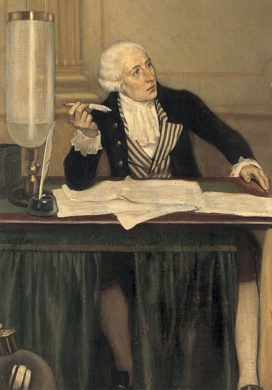 Antoine Laurent Lavoisier was a French chemist whose persistence in precise experiments led to the law of conservation of mass.

A Parisian aristocrat, Lavoisier studied law but went into science. He was the first to announce that air was made up of two gases — oxygen and what he called azote (now called nitrogen) — and by the 1780s Lavoisier was a well-known member of Europe’s scientific community and a public-minded citizen of Paris.

He collaborated on the influential Methods of Chemical Nomenclature (1787) and published what many consider to be the first modern chemistry textbook (1789).

Lavoisier also made money as an investor in a tax collecting firm, and during the French Revolution’s Reign of Terror he was beheaded by anti-monarchists. Because of his achievements he is sometimes called the father of modern chemistry.

His wife, Marie-Anne Pierrette Paulze (m. 1771), was his assistant, translator and illustrator.

Something in Common with Antoine Lavoisier