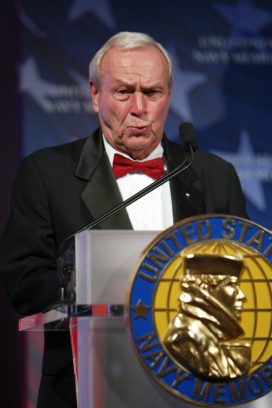 Arnold Palmer was one of the world’s best golfers, an icon of the 1960s and one of America’s first celebrity athletes.

Arnold Palmer grew up in Latrobe, Pennsylvania, right next to the golf course where his parents worked. He attended Wake Forest University for three years, where he excelled at golf, and then served in the U.S. Coast Guard before turning to golf as a career.

Between 1958 and 1964, Palmer won the Masters tournament four times, the British Open twice and the U.S. Open once. His charisma on the links earned him a loyal following, known as “Arnie’s Army,” and for decades Palmer got the bulk of fan attention whenever he played.

Arnold Palmer is credited with the popularization of the sport in the 1960s, and he turned his celebrity into lucrative endorsement deals, one of the first professional athletes to do so. During his career he had more than 60 PGA victories and more than 90 wins in tournaments around the world.

Arnold Palmer was also a pilot, and in 1976 he circumnavigated the globe in a small jet… The non-alcoholic drink named after him is a mix of iced tea and lemonade.

Something in Common with Arnold Palmer