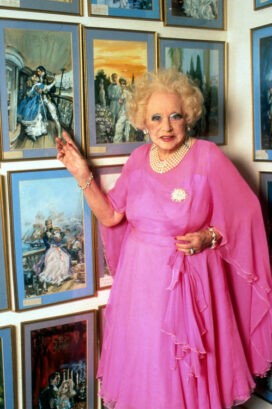 Dame Barbara Cartland was the most prolific author in British history, and was known as the “Queen of the Romance Novel” for her prodigious output of bodice-rippers. Barbara Cartland published more than 700 books in her lifetime, including 5 autobiographies and several books on cooking and health. But the romance novels were her clear bread and butter. Cartland published her first novel, Jig-Saw, in 1923 and was off and running. From the 1970s through the 1990s, she set world records by writing around two dozen novels each year. Barbara Cartland was also a celebrity, famous for her involvement in charities and social causes and easily recognized by her pink chiffon outfits. She was named a Dame of the British Empire in 1992. She died eight years later, in 2000, at age 98.

Something in Common with Barbara Cartland