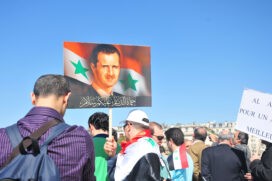 Bashar al-Assad has been the president of Syria since 2000.

Bashar al-Assad was promoted to Lieutenant General of the armed forces on 11 June 2000, then chosen by his father’s Baa’th Arab Socialist party to run — unopposed — for the presidency.

Trained at Damascus University as an opthamologist, he graduated in 1988 and went to work at Tishrin Military Hospital, then had a medical residency in England from 1992 to 1994.

Swept into office in 2000, he began a series of reforms in an effort to alter his father’s repressive regime.

By the time of his 2007 re-election, however, he was under fire from international human rights organizations for his treatment of political opponents.

Anti-government protests in Syria in 2011 led to civil war, with an opposition government in exile, the Syrian National Council, coordinating with protesters and anti-Assad military forces.

The United Nations General Assembly condemned President Assad for “gross human rights violations” in February of 2012. The U.S., under President Barack Obama, pursued removing Assad, but any sanctions proposed by the United Nations were vetoed by Russia, who eventually sent military support for the Assad government.

International pressure led Assad to hold elections in 2014, and he won a third term in what outsiders suspected was a corrupt process.

Under the administration of President Donald Trump, the U.S. eased pressure on Assad, but in 2017 the U.S. and other European nations accused Assad of using chemical weapons, which he denied. Vladimir Putin of Russia supported Assad.

President Bashar al-Assad has been married to Asma Akhras al-Assad since 2000 and they have three children.

Something in Common with Bashar al-Assad