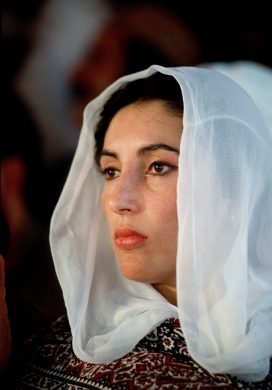 Benazir Bhutto was twice prime minister of Pakistan, and was campaigning for a return to power when she was assassinated in December of 2007.

Benazir Bhutto was born into a political family: her father, Zulfikar Ali Bhutto, was Pakistan’s prime minister from 1973-77. She earned undergraduate degrees from Radcliffe College (1973) in the U.S. and Oxford (1976) in England before returning to Pakistan. Her father was deposed, imprisoned, and finally executed after a 1977 military coup; Benazir Bhutto herself was imprisoned repeatedly before leaving for exile in London.

She became active in her father’s political party, the liberal Pakistan People’s Party (PPP), and returned to Pakistan in 1986. Bhutto’s political pedigree, her glamorous looks, and her reformist attitude were a potent combination, and in 1988 she was elected prime minister. For the next decade she was one of the most prominent women in the world, and was seen in particular as a symbol of progress in women’s rights.

Bhutto’s two terms as prime minister (1988-90 and 1993-96) both ended in controversy, with charges of corruption against Bhutto and her husband, Asif Ali Zardari. Bhutto was again forced into exile in 1999 before returning in October of 2007 to lead her party in upcoming national elections. Two months later she was shot and killed at a campaign rally in Rawalpindi by an attacker who then blew himself up.

The United Nations launched an investigation of her killing in July of 2009, after little progress was made in Pakistan; the UN report said that security arrangements by Pakistan federal and local authorities to protect her were “fatally insufficient and ineffective” and that Pakistani officials “failed profoundly… to investigate with vigour all those responsible for her murder.”

Benazir Bhutto’s books include “Foreign Policy in Perspective (1978) and the autobiography Daughter of Destiny (1989)… Benazir Bhutto and Asif Zardari were married in 1987. They had three children: Bilawal, Bakhtwar and Aseefa.  In 2012, Biliwal (b. 1988) “launched his political career with a fiery speech on the fifth anniversary of his mother’s assassination,” according to the Associated Press… Benazir Bhutto’s brother Murtaza, a Pakistani politician, was assassinated in 1996; another brother, Shahnawaz, was found dead in his apartment in France in 1985… Some sources list her 1973 degree as being from Harvard; at that time Radcliffe was an all-women’s college closely related to Harvard, and the two schools merged in 1999.