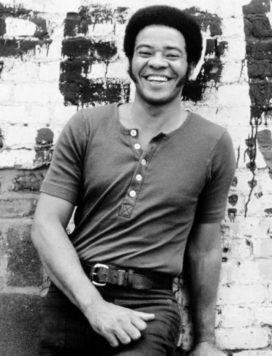 His obituary from the Associated Press

The Soul Man Who Walked Away

Bill Withers had a brief recording career in the 1970s and ’80s that produced songs that continued to be popular for decades, including “Lean On Me” and “Ain’t No Sunshine.”

He grew up the youngest of six kids in a small West Virginia town. Withers got out as soon as he could by joining the Navy right out of high school in 1956.

After nine years as a mechanic, he ended up in California and left the Navy. After a few years a civilian mechanic, Withers taught himself the guitar and began writing songs.

At the age of 32 Withers was an overnight success with his debut album, Just As I Am, thanks to the hit “Ain’t No Sunshine.”

His second album, Still Bill in 1972, was even more popular, and included the songs “Use Me” and “Lean on Me.” Withers recorded a live album in 1973 that some consider to be one of the best live recordings in pop history.

After his record company, Sussex Records, was bought out in 1975 by Columbia Records, his career changed. Withers, historically in control of all artistic aspects of his career, bristled under corporate management, but fulfilled his contract and released five more albums.

The last hit record Withers recorded wasn’t on one of his records. “Just the Two of Us” was recorded with Grover Washington, Jr. for his 1980 album, Winelight.

Withers walked away from his successful career for a life of retirement and property investment in the 1980s, but his songs continued to be popular in movies and television shows.

Something in Common with Bill Withers