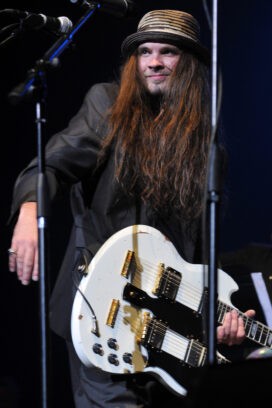 Bo Bice was the surprise second-place finisher to Carrie Underwood on the 2005 edition of the TV talent show American Idol. A country-scruffy Southern rocker with a mane of hair reminiscent of Gregg Allman, Bice had a rough-edged look and sound that helped him stand out on the show and won him a horde of fans who became whimsically known as “Bo Peeps.” After his run on American Idol Bice released his debut solo album, The Real Thing (2005). Bice has since toured with his longtime band, Sugar Money.

Bice married girlfriend Caroline Fisher on 15 June 2005… Their son Aidan was born on 24 September 2005… According to Wikipedia, Bo got his nickname as a child after his grandmother compared him to actor Humphrey Bogart.

Something in Common with Bo Bice