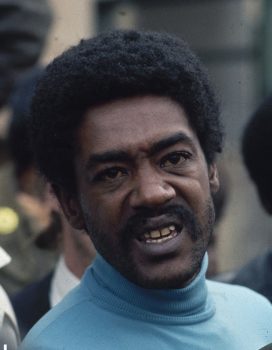 Seale was originally from Texas, but had been living in Oakland since he was a kid.

Both politically active, in 1966 they formed the Black Panther Self-Defense Party, modeled after a Black political party in Louisiana called the Lowndes County Freedom Organization (their symbol was a black panther).

Community service and coalition politics reflected Seale’s new approach to the issues of civil rights and racism, but Seale was branded a rabble rouser by authorities and media alike.

Seale was in the spotlight during the trial of the Chicago 7, among those accused of inciting a riot at the 1968 Democratic Convention.

Although Seale was not involved in the riot, the trial was a circus that reached its peak when the judge ordered Seale bound and gagged.

While on trial in Chicago, Seale was in jail on charges stemming from a murder charge in Connecticut. He got out of that when the jury couldn’t reach a verdict.

Still, Seale was in jail until 1972 because of all the contempt of court charges in Chicago; on appeal all those charges were eventually reversed.

He ran unsuccessfully for mayor in Oakland in 1973, but by the end of the decade was out of active politics. Seale has since lectured, written books, worked with non-profits and appeared in many documentaries.

Seale’s books include Seize the Time: The Story of The Black Panther Party and Huey P. Newton (1970), A Lonely Rage: The Autobiography of Bobb Seale (1978) and Barbeque’n with Bobby Seale: Hickory & Mesquite Recipes (1987).

Something in Common with Bobby Seale