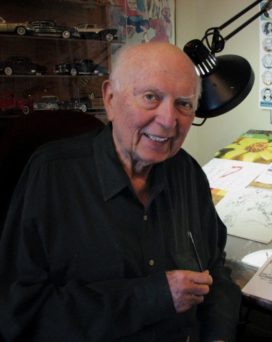 Brad Anderson was an American cartoonist whose most famous work was Marmaduke, a syndicated strip that’s been a staple in U.S. newspapers since 1954.

Anderson grew up drawing cartoons, a talent he kept up as a Navy mechanic during World War II.

Anderson earned a degree at Syracuse University in 1951. He started out in the advertising business, but he soon left his office job for freelance cartooning, first with a strip called Grandpa’s Boy (1954-66), and then with Marmaduke.

A single-panel cartoon, Marmaduke daily explored the irresistible charms of a destructive Great Dane; at its peak, the comic appeared in more than 600 newspapers.

In later years, Anderson was joined in the studio by his son, Paul.

Marmaduke was the basis for a 2010 film starring Owen Wilson (as the voice of Marmaduke).

Something in Common with Brad Anderson