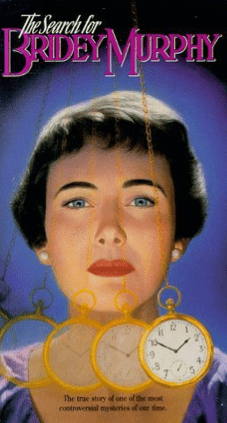 The case of Bridey Murphy brought broad attention to the notions of past lives, reincarnation and the use of hypnotic regression to reveal hidden memories. In 1952 a woman named Virginia Tighe, the wife of a Colorado businessman, was hypnotized by Morey Bernstein. During her sessions she gave a detailed account of her “past life” as an Irish woman named Bridey Murphy, claiming she had been born in 1798 and died in 1864. Bernstein recorded the sessions and published the story in 1956 (in the book Tighe was referred to as “Ruth Simmons”). The Search for Bridey Murphy became a bestseller (and was made into a movie) and many people took the tale as proof of reincarnation. Tighe, who claimed she’d never been to Ireland, had provided an abundance of commonplace details of life in 19th century Ireland, and parts of her story checked out and others didn’t. A Chicago newspaper made the claim that Virginia Tighe had lived across the street from an Irish woman named Bridey Murphy Corkell when she was a child, causing many to dismiss Bernstein and Tighe as frauds. That explanation has proven to be unsatisfactory for many people, and the Bridey Murphy case continues to be a classic headscratcher for those who study the paranormal.