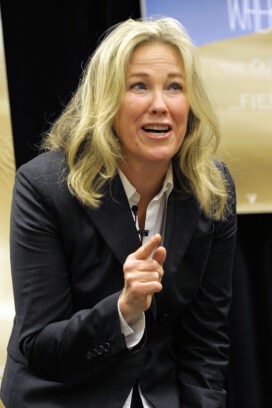 Canadian comic legend Catherine O’Hara is now best known for her role as in the TV series Schitt’s Creek (2015-20).

O’Hara was part of the comedy group Second City in Toronto in the early 1970s before she became better known as the mom in Home Alone (1990) and as a familiar cast member of Christopher Guest’s “mockumentaries,” including side by side with her Schitt’s Creek co-star, Eugene Levy, Waiting for Guffman (1996) and Best in Show (2000).

O’Hara was one of the original founders (along with John Candy and others) of the satirical TV show SCTV in 1976.

In the 1980s O’Hara started making movies and appeared in a variety of Hollywood comedies. Her notable roles include: the neurotic wife in Tim Burton‘s Beetlejuice (1987); the mom in Home Alone and its sequel (1990 and 1992); the voices of Shock and Sally in Tim Burton’s A Nightmare Before Christmas (1993); and the kooky ladies in A Mighty Wind (2003) and For Your Consideration (2006) .

Something in Common with Catherine O’Hara