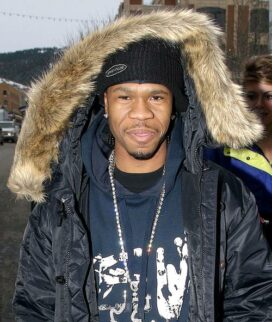 Chamillionaire is the stage name of Hakeem Seriki, a Texas rapper who rocketed to stardom in 2006 with the singles “Turn It Up” and “Ridin’.” Seriki got his start in the late 1990s, doing freestyle rap for SwishaHouse Records in Houston. He and rapper Paul Wall, a childhood friend, sold mixed tapes and CDs of themselves rapping over tracks that had been “chopped and screwed” (sonically manipulated down-tempo beats). Chamillionaire (a play on “chameleon” that’s pronounced “KAmillionaire”) made a name for himself in Texas as the “Mixtape Messiah,” and a self-distributed 2002 release, Get Ya Mind Correct sold more than 100,000 copies and got nationwide attention as one of the year’s best underground hip-hop records. After several self-released records, Chamillionaire joined Universal Records and released The Sound of Revenge in late 2005. A high profile on MTV and hit singles soon followed and by the end of 2006 Chamillionaire was a star. His other albums include Ultimate Victory (2007), Mistape Messiah 6 (2009) and Venom (2010).

Seriki’s father was a Muslim and his mother was a Christian; they separated when he was a boy… He joined Ciara for “Get Up,” the hit song from the movie Step Up (2006 starring Channing Tatum)… The "Weird Al" Yankovic song “White & Nerdy” is a parody of Chamillionaire’s “Ridin’.”

Something in Common with Chamillionaire