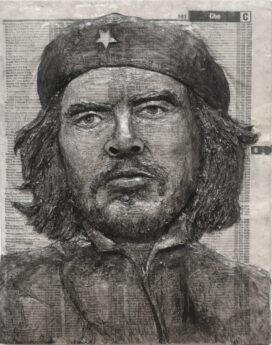 Ernesto “Che” Guevara worked and studied medicine in various parts of Latin America before teaming up with Fidel Castro in 1959 to force a revolution in Cuba.

After the revolution, Che Guevara was second only to Castro in power and served in several posts in the Cuban regime. In 1965 he left Cuba and traveled the world as a fomenter of revolution, working unsuccessfully toward Marxist/Leninist takeovers in the Congo and Bolivia. In Bolivia he was captured by U.S.-backed military troops and executed in 1967.

Guevara was known for his flamboyance and ruthless dedication to revolution, and his successes and untimely killing made him an anti-capitalist icon in the 1960s and beyond. Guevara wrote the books Guerrilla Warfare (1961) and Reminiscences of the Cuban Revolutionary War (published posthumously in 1968).

Che Guevara’s remains were discovered in Bolivia in 1997 and moved to a mausoleum in Cuba… Che Guevara was played by actor Benicio Del Toro in the 2008 film Che, a two-part biography directed by Steven Soderbergh.