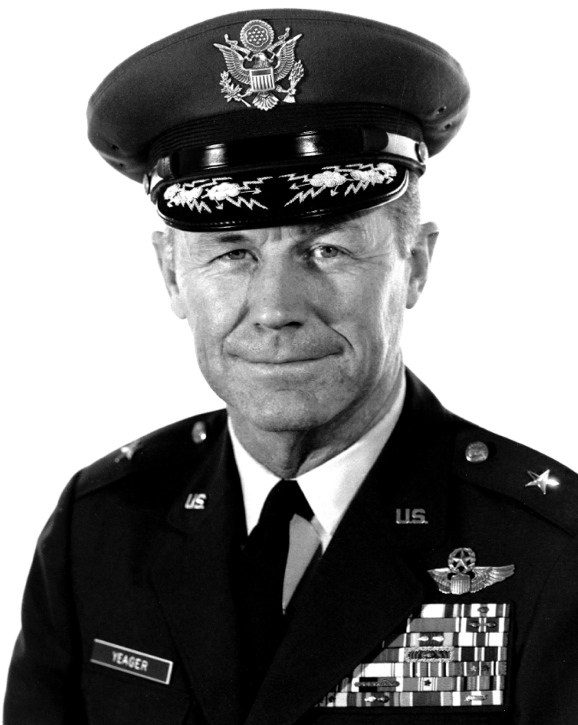 Chuck Yeager was the first human to fly faster than the speed of sound.

Born and raised in small-town West Virginia, Chuck Yeager joined the Army as an airplane mechanic in 1941. As World War II went on he joined a pilot training program and began to fly fighters.  Yeager was shot down over France in 1943, but managed to escape without being captured; he returned to flying and shot down 13 German planes during the war, including five in a single day on October 12, 1944.

After the war he was put in charge of pilot training for experimental aircraft, as well as being a test pilot himself. On October 14, 1947, he became the first person to break the sound barrier, flying a rocket powered Bell X-1 jet he named the Glamorous Glennis in tribute to his wife.

Yeager later helped train the first U.S. astronauts for the Mercury program. During the Vietnam War, he flew 127 missions as commander of a fighter wing. He retired from the Air Force as a brigadier general in 1975.

In the 1980s, Chuck Yeager became a much bigger celebrity, thanks in large part to the 1984 film made from Tom Wolfe’s book The Right Stuff, an account of the early U.S. space program. Wolfe credited Yeager’s calm attitude and West Virginia accent with influencing the voices of a generation of commercial airline pilots, who he said imitated “the drawl of the most righteous of all the possessors of the right stuff: Chuck Yeager.”

Chuck Yeager’s decorations “included the Distinguished Service Medal, the Silver Star, the Legion of Merit, the Distinguished Flying Cross and the Bronze Star,” according to his 2020 obituary in The New York Times. He was awarded the Presidential Medal of Freedom by President Ronald Reagan in 1985. He published an autobiography, Yeager, in 1985, and a second memoir, Press On!, in 1988.

Something in Common with Chuck Yeager