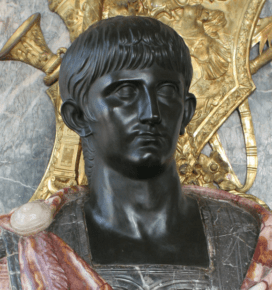 200 words on Claudius, with all the pertinent facts and figures

An Online Encyclopedia of Roman Emperors

Nice meaty profiles of Claudius, Augustus, and many more

The Life of Claudius

Translation of the original work by the historian Seutonius

Claudius was the fourth emperor of Rome, following Augustus, Tiberius and the infamous Caligula. Because he stammered and had a clubfoot, Claudius was lightly regarded until he was made emperor after Caligula’s murder in the year 41. (According to legend, members of the Praetorian Guard installed Claudius on the throne after finding him cowering behind a palace curtain.) Despite his reputation as a feeble man, Claudius proved to be a sturdy emperor; he is particularly remembered for conquering and colonizing Britain, and for improving the civil administration of Rome. Claudius died in 54 A.D. under mysterious circumstances; many historians believe he was poisoned by his wife, Agrippina, so that her son Nero would become emperor.

Claudius gained new fame when historian Robert Graves published his landmark historical novel I, Claudius in 1934. The book was made into a popular BBC miniseries of the 1970s, with actor Derek Jacobi playing Claudius… Claudius was the nephew of Tiberius and the brother of the soldier Germanicus.

Something in Common with Claudius