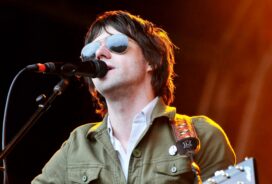 Conor Oberst writes and sings for the folk-rock band Bright Eyes, a college radio favorite since the late 1990s.

Oberst began writing and recording his own songs just after he hit his teens.

By the time he was releasing Bright Eyes records in the late ’90s he’d already released two records with the band Commander Venus and started his own label, Saddle Creek Records.

Recording as the band Bright Eyes he has released a string of singles, EPs and full-length albums that caused American rock music critics to break out in choruses of “the next Bob Dylan!”

The pained adolescent poetry of his early records earned Oberst a crowd of loyal fans, and his doe-eyed, fashionably shaggy look made him a heartthrob of the indie rock set.

His best-known songs include “Lover I Don’t Have to Love,” from 2002’s Lifted or The Story is in the Soil, Keep Your Ear to the Ground; “At the Bottom of Everything” and “First Day of My Life,” from 2005’s I’m Wide Awake, It’s Morning; and “Four Winds,” from 2007’s Cassadaga. He released a self-titled solo album in 2008, his first in ten years, and in 2009 he released Outer South with the Mystic Valley Band.

His 2005 performance of “When the President Talks to God,” originally aired on Jay Leno‘s TV, became a popular video on YouTube… Oberst is known to use a variety of visiting musicians for Bright Eyes shows and recordings, but the band usually includes Mike Mogis and Nate Walcott.

Something in Common with Conor Oberst