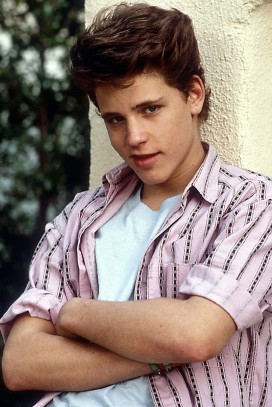 Corey Haim was a child star and teen heartthrob in the 1980s who famously spiraled into drug abuse in the 1990s and died in 2010 at the age of 38. He did work in TV commercials when he was a boy, and had a regular role in the Canadian TV series The Edison Twins (1982-86). His breakthrough came as the star of the film Lucas (1986, with Charlie Sheen), playing a sensitive teen in love. He followed that with the box office hit The Lost Boys (1987), a teen-vampire movie that starred Kiefer Sutherland and Corey Feldman. Haim and Feldman became frequent co-stars and inseparable pals, “the two Coreys.” They had hit movies with License to Drive (1988) and Dream a Little Dream (1989) and became teen idols, but off-screen they went a little wild. During the 1990s Haim was in and out of rehab while still making movies, but he went from being Hollywood gold to being a stereotypical crash-and-burn child star. Attempts to resurrect his career included stints in reality TV, including, with Feldman, The Two Coreys (2007-08). He died suddenly after collapsing at home in 2010.

An autopsy concluded that Haim died of “diffuse alveolar damage due to community acquired pneumonia.” The autopsy report also stated that Haim had “an enlarged heart weighing 530 grams (normal average weight is 300 grams).”

Something in Common with Corey Haim