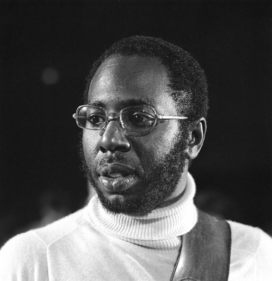 A versatile and creative musician, Curtis Mayfield is usually remembered for performing the funky soundtrack to the 1972 blaxploitation movie Superfly. The album is considered one of R&B’s landmark discs, and Mayfield became an influence on many later soul, rock, and R&B musicians. Curtis Mayfield was a composer, bandleader, and multi-instrumentalist: he played guitar, piano, saxophone, bass and drums. He dropped out of high school in the 1950s and soon enough formed The Impressions, which became a leading 1960s soul group. Mayfield lead the group until 1970, when he went solo. Mayfield was inducted into the Rock and Roll Hall of Fame twice: as an individual performer (inducted in 1999) and as the leader of The Impressions (inducted 1991).

Curtis Mayfield was paralyzed from the neck down in a freak onstage accident at a Brooklyn concert in 1990.