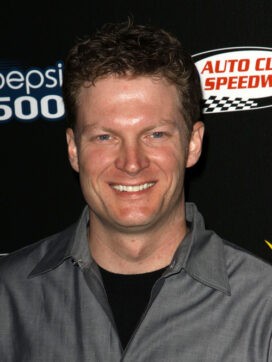 Dale Earnhardt Jr. is a stock car driver and son of NASCAR legend Dale Earnhardt. The younger Earnhardt was twice champion of the Busch Racing Series, then moved up to the Winston Cup circuit for his first full season on in 2000. He had two Winston Cup victories that year, including his first at the Coca Cola 600 in April. Earnhardt finished second in the 2001 Daytona 500, the race in which his father was killed. Three years later, Earnhardt took the checkered flag to win the 2004 running of the Daytona 500. Dale, Jr. became one of the most popular NASCAR drivers, and he stayed that way despite rocky seasons in 2005, 2006 and 2007. He also had success as the owner of his own racing team, JR Motorsports, but in 2007 he joined the team of Hendrick Motorsports. In August 2007 he announced he would be joining Hendrick without his famous car number (8), laying the blame on his stepmother’s unwillingness to relinquish the licensing rights.

Dale, Jr. does not have an ownership interest in Dale Earnhardt, Incorporated, which is controlled by Teresa Earnhardt, Dale, Sr.’s widow and Dale, Jr.’s step-mother)… Racer Kerry Earnhardt is Dale Jr.’s half-brother… Their grandfather Ralph Earnhardt was also a popular race car driver.

Something in Common with Dale Earnhardt Jr.