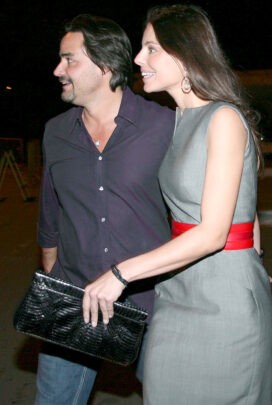 A green-eyed brunette with a wide, cheery smile, Daniella Cicarelli was voted “The Muse of Summer 2001” in a public vote in Brazil. Her success made her a big star in that country and led to a gig hosting the show Dance o Clipe on MTV Brazil. She also has starred in TV ads for Pepsi Cola, and has appeared in the teleplay Filhas da Mäe (The Children of the Mother). She was engaged to the Brazilian football (soccer) star Ronaldo in 2004, but the two parted ways without marrying in 2005.

A video of Cicarelli cavorting in the ocean with her boyfriend, investment banker Renato Malzoni Filho, was an internet sensation in Brazil in 2006… Cicarelli and Ronaldo held a lavish celebration of their engagement in France in 2005 which is often described as a wedding, but they were not in fact married; Spanish law prevented Ronaldo from marrying within a year of his previous divorce from model Milene Domingues. Cicarelli and Ronaldo broke up in May of that year, leading to persistent reports that they had an “86-day marriage.”

Something in Common with Daniella Cicarelli