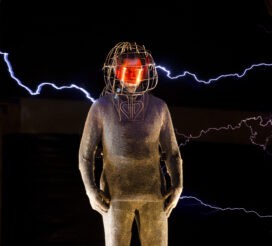 Blaine’s remarkable talent was first showcased in a series of national TV specials in the late 1990s, with dramatic gasps from bystanders caught on camera.

Soon David Blaine was both a magician and a celebrity, known for his hipster style, uptown-casual clothes, and friendships with actors like actor Leonardo DiCaprio.

Over time Blaine moved from small-scale stunts to much-publicized set pieces that were as much endurance tests as feats of legerdemain.

David Blaine was buried in a glass coffin for a week in a 1999 New York City stunt, and the next year he spent three days encased in a block of ice in Times Square. He stood atop a 90-foot pillar in New York’s Bryant Park for two days in 2002 before falling into a cushion of cardboard boxes. In 2003 he spent 44 days suspended in a glass box near the Thames River in London.

He lounged in a water-filled glass sphere outside New York’s Lincoln Center for a week in May of 2006 in a stunt he called “Drowned Alive,” and in September 2008 he hung upside down in New York’s Central Park for 60 hours in a feat called “Dive of Death.”

Among his other stunts is “Electrified,” in which (as described by the New York Daily News) he stood “on a 20-foot-high (6-meter-high) platform at Pier 54 on Manhattan’s West Side, within a Tesla coil apparatus that continually zapped him with artificial lightning bolts.”

Blaine tours, does television specials and hangs out with celebrities like Madonna.

At the end of “Drowned Alive,” David Blaine tried but failed to set a world record for holding one’s breath, while also attempting to escape from shackles at he bottom of his sphere. Divers pulled him from the water after seven minutes.

Something in Common with David Blaine