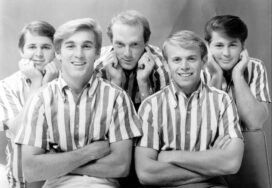 Dennis Wilson was the drummer for The Beach Boys, the pop band which ranked with The Beatles and The Rolling Stones among the biggest music acts of the 1960s. The group included Dennis Wilson, his brothers Carl and Brian, cousin Mike Love, and family friend Al Jardine; their many hit singles included “Good Vibrations,” “Surfin’ U.S.A.,” “In My Room,” “Help Me Rhonda,” and “Little Deuce Coupe.” Dennis Wilson had a reputation as an adventurer and good-time guy; though the Beach Boys were famous for their surf music, Dennis was the only active surfer in the group. In later years he struggled with alcohol and drug abuse, and he died in 1983 while diving off a yacht at California’s Marina del Rey.

Dennis Wilson and singer James Taylor starred in a little-known 1971 film titled Two-Lane Blacktop… Dennis Wilson was married five times to four women (he twice married and divorced Karen Lamm, the former wife of Robert Lamm of the group Chicago). For a time he dated Christine McVie of the group Fleetwood Mac.

Something in Common with Dennis Wilson