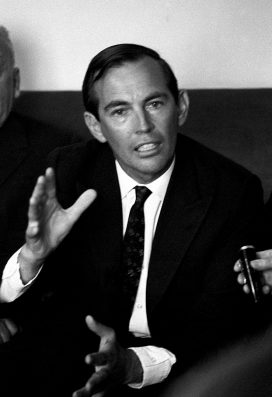 The patient, 53-year-old dentist Louis Washkansky, was given the heart of a 25-year-old auto crash victim named Denise Darvall. Washkansky died from infection 18 days later, but the transplant made Barnard one of the world’s most famous surgeons.

Christiaan Barnard was born in South Africa and earned a Bachelor of Medicine degree (MB ChB) in 1945, and then a Master of Medicine degree in 1953, both from the University of Cape Town. From 1955-57 he studied surgery at the University of Minnesota, and when he returned to South Africa he began to focus on heart surgery, and eventually on the possibility of a full heart transplant.

His 1967 transplant made him such a celebrity that (according to the BBC) he later dated actresses Gina Lollobrigida and Sophia Loren. His next transplant patient, Philip Blaiberg, survived for 19  months, and in time Barnard performed several more transplants. Rheumatoid arthritis forced him to give up surgery in 1983. He wrote two autobiographies: One Life was published in 1969, and The Second Life was published in 1993.

Christiaan Barnard died in 2001 while vacationing in Cyprus. The cause of death was first thought to be a heart attack, but later was determined to be a severe asthma attack… Christiaan Barnard was married and divorced three times: to nurse Aletta Gertruida Louw (1948-69); to heiress Barbara Zoellner (1970-82); and to model Karin Setzkorn (1988-2000). He had two children with Louw, Deirdre (born 1950) and Andre (b. 1951); two children with Zoellner, Frederick (b. 1972) and Christiaan Jr. (b. 1974); and two children with Setzkorn, Armin (b. 1989) and Lara (b. 1997). Deirdre Barnard was born the year her father turned 28; Lara Barnard was born the year he turned 75… His name is sometimes misspelled as Christian Barnaard, or Christian Baarnard.