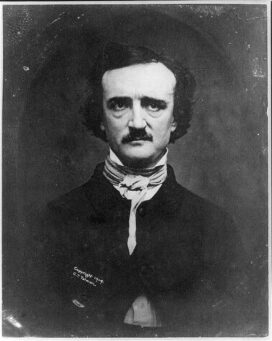 Edgar Allan Poe’s classic poem “The Raven” cemented his reputation as a black-feathered literary master of the macabre. He wrote dozens of creepy short stories, many ending in death, with victims walled up in cellars, threatened by razor-sharp pendulums, or just haunted by the looming unknown. Edgar Allan Poe first mixed poetry with work as a soldier in the U.S. Army in the late 1820s. He was dismissed from West Point and moved to Baltimore, Maryland, where he began writing prose. Throughout the 1830s and 1840s, Edgar Allan Poe worked on various magazines in Richmond, Philadelphia and New York, and also published creepy short stories and poems, including “The Purloined Letter,” “The Tell-Tale Heart” and “The Cask of Amontillado.” His story The Murders in the Rue Morgue is widely considered to be the first modern detective story, with Poe the forerunner of later masters of the craft like Sir Arthur Conan Doyle and Agatha Christie. Never in robust health, and a heavy drinker into the bargain, Edgar Allan Poe died under mysterious circumstances at age 40 after visiting Virginia to lecture. He was found languishing on the street in Baltimore and taken unconscious to a local hospital, where he died.

Edgar Allan Poe was played by John Cusack in the 2012 movie The Raven… Poe’s detective in The Murders in the Rue Morgue was named C. Auguste Dupin… Baltimore’s National Football League team, the Ravens, is named in whimsical tribute to Poe’s famous poem… Starting with the 100th anniversary of Poe’s death in 1949, an anonymous visitor has come to Poe’s grave each year on the writer’s birthday, leaving three roses and a bottle of cognac. By tradition no one attempted to follow the “Poe Toaster” and his identity remained unknown. The original Poe Toaster was apparently succeeded by his sons in the 1990s. The last visit by the Poe Toaster was in 2009… Edgar Allan Poe wrote an 1836 essay unmasking the chess-playing automaton The Turk as a human-powered fraud.

Something in Common with Edgar Allan Poe