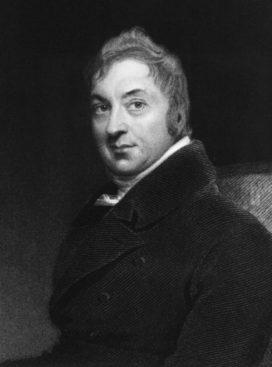 Edward Jenner was an English physician who for decades was credited for introducing the practice of vaccinating against smallpox.

Jenner, apprenticed to a surgeon as a boy, studied medicine briefly in London before returning to his rural hometown to open his own medical practice (1792).

Following up on local lore that said dairymaids who had contracted cowpox were immune to smallpox, Jenner decided to see if he could adapt the Turkish practice of inoculation to prevent the spread and devastation of smallpox.

In May of 1796 he took a gamble and inoculated James Phipps, the 8 year-old son of a local farmer.

Phipps was exposed to fluid from the pustules of a woman with cowpox. The boy contracted cowpox, and several weeks later Jenner exposed him to smallpox. Fortunately, the boy didn’t contract smallpox and Jenner’s theory was proved correct.

After other successful trials, Jenner published his findings in Inquiry into the Cause and Effects of the Variolae Vaccinae in 1798.

Biographies of Jenner have historically made it out to sound like a genius and his miracle, but in fact it took Jenner nearly three decades of experimentation, and the work itself was based on what appears to have been widespread knowledge among farmers and rural doctors — the relationship between cowpox and smallpox.

Jenner went on to become famous as the world embraced “vaccination,” a term he coined (because vacca is Latin for cow, and vaccinia was the term for cowpox).

Jenner was also an educated naturalist and horticulturist, an amateur geologist and zoologist (he was elected as a Fellow of the Royal Society for a paper on the nesting habits of the cuckoo) and a fossil hunter who discovered the bones of a plesiosaur in 1819.

Something in Common with Edward Jenner