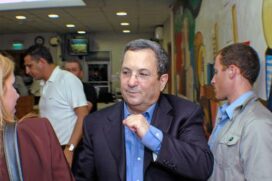 The tenth prime minister of Israel (1999-2001), Ehud Barak is the most decorated soldier in the history of the Israeli Defense Forces (IDF). After reaching the rank of Lieutenant General, Barak gradually moved into the political realm and in 1995 was appointed Minister of the Interior under Yitzhak Rabin. When Rabin was assassinated, Barak became Minister of Foreign Affairs under Shimon Peres. In 1996 Barak was elected to the Knesset, and in 1999 he was elected Prime Minister, replacing Benjamin Netanyahu. During his two years in office Barak tried unsuccessfully to pursue peace negotiations with Syria and with Palestinian groups, and he was criticized for pulling troops out of Lebanon. In 2001 he was succeeded by Ariel Sharon. By 2007 Barak had made a political comeback and in June he was elected leader of Israel’s Labor Party.