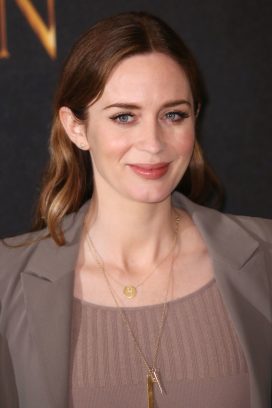 Emily Blunt has been a leading lady on the big screen since breaking out as Meryl Streep‘s catty assistant in 2006’s The Devil Wears Prada.

Emily Blunt has since had a variety of roles, from period pieces and romantic comedies to intimate dramas and action thrillers. Her film roles include The Jane Austen Book Club (2007), The Young Victoria (2009, as Queen Victoria), The Five Year Engagement (2012), Salmon Fishing on the Yemen (2011, opposite Ewan McGregor), The Adjustment Bureau (2011, starring Matt Damon), Looper (2012, starring Joseph Gordon-Levitt) and Edge of Tomorrow (2014, starring Tom Cruise).

Somewhere in all that movie making, Emily Blunt had time to marry actor John Krasinski (2010) and have two children. She has also appeared in Sicario (2015), The Huntsman: Winter’s War (2016) and The Girl on the Train (2016, with Haley Bennett).

Something in Common with Emily Blunt