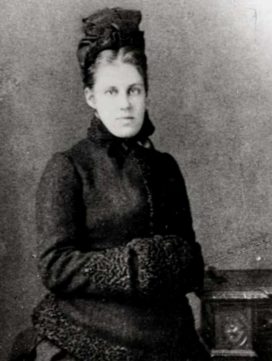 Emma Lazarus was an American writer of Portugese-Jewish ancestry whose 1883 poem, “The New Colossus,” is inscribed on the pedestal of the Statue of Liberty.

Lazarus grew up in a prosperous Jewish family in New York and began writing poems as a teenager. In 1886 her first collection, Poems and Translations, was published by her father.

She attracted the attention and support of Ralph Waldo Emerson, and soon found herself a member in the elite literary circles of New York City.

In the 1880s Lazarus was moved by the news of the Russian and Eastern European persecution of Jews to become more active as an advocate for Jewish immigrants.

She published many well-received poems and essays, including “The New Colossus,” now one of the most often quoted poems in U.S. history, especially the lines “Give me your tired, your poor, / Your huddled masses yearning to breathe free, / The wretched refuse of your teeming shore.”

Upon returning to the U.S. from a trip to Europe, Lazarus, who was suffering from Hodgkin’s disease, died at the age of 38.

Something in Common with Emma Lazarus