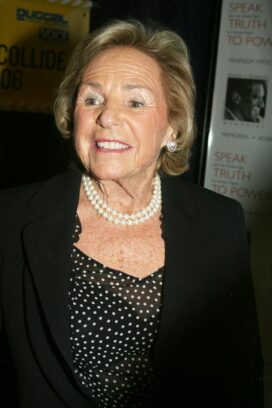 Ethel Kennedy is the widow of Senator Robert F. Kennedy and a longtime matriarch of the far-flung Kennedy family.

She was named Ethel Skakel when she married Robert Kennedy on June 17, 1950; they met because Ethel had roomed with RFK’s sister Jean Kennedy at the Manhattan College of the Sacred Heart. As Ethel Kennedy she became a well-known member of the Kennedy clan, particularly after Robert became Attorney General under his brother, John F. Kennedy, and then a senator from New York.

Ethel and Robert had eleven children in all. Ethel Kennedy was widowed in 1968 when her husband was shot to death by Sirhan Sirhan while Robert Kennedy was campaigning for president. After her husband’s death, Ethel Kennedy founded the RFK Memorial organization, a non-profit group devoted to social activism and human rights.

Her maiden name was back in the news in 2002 when a nephew, Michael Skakel, went on trial for and was convicted of the 1975 killing of Martha Moxley. Michael Skakel is the son of Ethel Kennedy’s brother Rushton Skakel.

Ethel Kennedy’s son Michael Kennedy died in a 1997 skiing accident… Another son, David, died of a drug overdose in 1984… Her daughter, Kathleen Kennedy Townsend, was the Lieutenant Governor of Maryland from 1995-2003… When her husband was killed, Ethel Kennedy was pregnant with their eleventh child, Rory. (Ethel’s nephew John Kennedy Jr. was killed in a 1999 plane crash while flying to attend Rory’s wedding)… Robert Kennedy was assassinated five years after the death of John Kennedy and just two months after the assassination of civil rights leader Martin Luther King… Michael Skakel was sentenced to 20 years to life in prison, but in 2018 his conviction was vacated by the Connecticut Supreme Court, which said his original trial lawyer was incompetent.

Something in Common with Ethel Kennedy