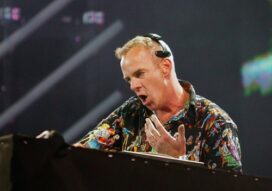 Fatboy Slim (the alter ego of musician Norman Cook) is a popular hip-hop/techno DJ and producer. As Norman Cook he played bass for the pop group The Housemartins and performed with the dub supergroup Beats International; as mixmaster Fatboy Slim his albums Better Living Through Chemistry (1996) and You’ve Come A Long Way Baby (1998) produced dancefloor hits that crossed over to the radio, including the hit singles “Rockefeller Skank” and “Praise You.” The video for his tune “Weapon of Choice,” directed by Spike Jonze and starring Christopher Walken dancing in a surreal hotel lobby, was nominated for nine 2001 MTV Video Music awards, and by that time Cook was one of the most famous DJs in the business. His albums include Halfway Between the Gutter and the Stars (2000), Palookaville (2004), and (with David Byrne) Here Lies Love (2010), but his real fame remains in his live turntable performances.

Something in Common with Fatboy Slim