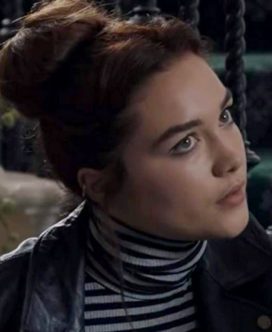 Florence Pugh is an English actress and star of Ari Aster‘s film, Midsommar (2019).

Right out of high school, Pugh’s career took off after being cast in the TV series The Falling (2014).

On the big screen, she played a determined, steely wife in 2016’s Lady Macbeth and wowed the critics if not mobs of filmgoers.

Switching to blonde and stepping into the horror genre, she cried a lot and weathered the weird world of Midsommar, the highly-anticipated second feature from the director of Hereditary (2018).

Her other appearances include starring in the BBC series The Little Drummer Girl (2018, based on the novel by John Le Carré), the family-of-wrestlers comedy Fighting with My Family (2019, starring Dwayne Johnson), and the Greta Gerwig version of Little Women (2019, starring Emma Watson and Saoirse Ronan).

Something in Common with Florence Pugh