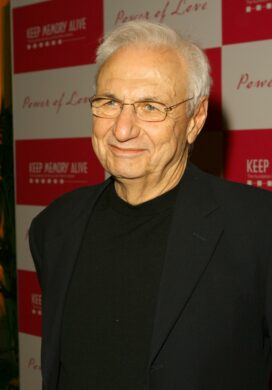 Includes bio and an interview from 1995

Good stuff from an architecture fan

His bio from one of his projects, the Eisenhower Memorial

Frank Gehry is one of the few modern architects whose name is known outside the field — a “star-chitect” best known for exotic structures such as the Guggenheim Museum in Bilbao, Spain and the Experience Music Project in Seattle, Washington. A native of Ontario, Canada, Gehry’s been a Californian since 1947. He graduated from the University of Southern California in 1954 and established his own firm in Los Angeles in 1962 (by that time he had also changed his name from Goldberg to Gehry). Gehry got some notice in the early 1970s with furniture made of cardboard (the “wiggle chair”), but he became famous in the late ’70s for the renovations he’d done to his own residence in Santa Monica. That marked the beginning of what would become common themes, from the modern art sensibilities to the use of mass-produced materials. Since then Gehry has won just about every major award in his field and is often said to be the most influential American architect since Frank Lloyd Wright. But Gehry’s warped buildings of corrugated sheet metal and chainlink fencing don’t please everyone, and his “functionless forms” drive some critics batty. Gehry has designed many famous structures around the world, including Prague’s “Dancing House” (1995), Manhattan’s 8 Spruce Street Tower (2011), the Disney Concert Hall in Los Angeles (2003) and the Olympic Fish for the Olympic Village in Barcelona (1992).