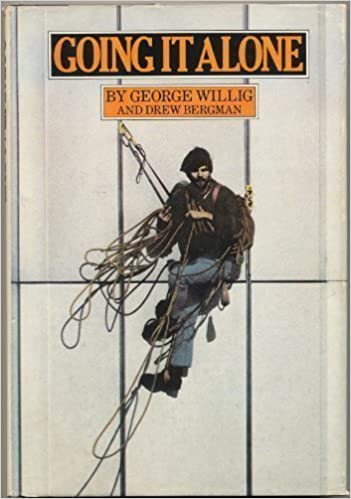 George Willig was a 27-year-old toymaker from Queens when he climbed solo up the side of the south building of the World Trade Center (known as WTC 2) on the morning of May 26, 1977.

Using special climbing clamps which fit into window-washing channels on the side of the building, George Willig began his illegal ascent around 6:30 on a Thursday morning. He was accompanied on the ground by his brother Steve, friend Gerald (Jery) Hewitt, and photographer Michael Cardacino. Willig was soon spotted by passersby, and as he reached the 55th or 66th floor (reports vary), Willig was approached by police who had been lowered on scaffolding. After a discussion, they allowed him to proceed to the top on his own. When he reached the 110th floor around 10:00 a.m., he was arrested and charged with trespassing.

The Port Authority announced they would sue him, but it became clear that Willig, dubbed the “Human Fly” by the Daily News, had already become a New York folk hero. A settlement was reached for public relations purposes, and Willig was fined one penny for each floor of the tower he climbed, a total of $1.10.

By all accounts shy of the limelight, George Willig nonetheless made the rounds on TV shows and in magazines, but left it all behind after a couple of years — for life in California in the construction business.

George Willig signed his name on a chunk of metal at the top observation deck, and it remained visible until the building was destroyed in the attacks of September 11, 2001… George Willlig attended St. John’s University, where he earned a B.S. in environmental science in 1976, according to the New York Daily News… Gerald (Jery) Hewitt, who had helped out with the climb, later became a prominent Hollywood stunt coordinator who worked on films including Good Will Hunting, Crocodile Dundee and True Grit.

Something in Common with George Willig