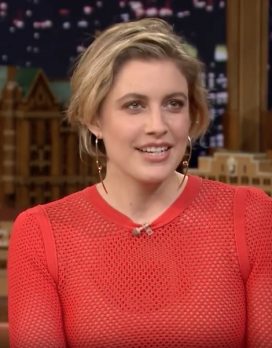 Actress Greta Gerwig made her debut as a film director with 2017’s Lady Bird (starring Saoirse Ronan) and was Oscar nominated for her script and direction.

Before that, Gerwig was known as the star of the indie-circuit movie Frances Ha (2012) and the writing (and romantic) partner of filmmaker Noah Baumbach.

A 2006 graduate of Barnard College, Gerwig began her screen career right out of school. She made her mark by appearing in several independent films, particularly those of what’s called “mumble core” movies — sad-sack navel-gazing to some, revelatory personal cinema to others.

She appeared in Noah Baumbach’s Greenberg (2010, starring Ben Stiller), then starred in his 2012 film Frances Ha (2012). They began collaborating on screenplays, and then became a couple after Baumbach’s divorce from Jennifer Jason Leigh.

Something in Common with Greta Gerwig