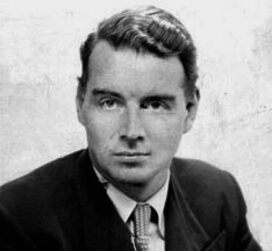 Guy Burgess at the BBC

Archive of his work at the BBC

Great audio archive on Burgess and others

Nice summary of the whole affair

Guy Burgess was one of the so-called Cambridge Five, a group of British intellectuals and intelligence agents who passed Western secrets to the Soviet Union during the Cold War. He was educated at Eton, Royal Naval College, Dartmouth and Trinity College at Cambridge, where he met Donald MacLean, Anthony Blunt and Kim Philby, all of whom were later confirmed to be communist agents (the fifth man has never been conclusively identified). Burgess and Blunt were key members of the Cambridge Apostles, an elite group of intellectuals that included John Maynard Keynes, E.M. Forster and Ludwig Wittgenstein. Communism was a fashionable and persuasive force at the time, and sometime in the mid-1930s, Burgess was contacted by Soviet agents and converted. Burgess was, by all accounts, a forceful personality, highly intelligent and openly homosexual, yet unpredictable when drinking, which was all the time. After Cambridge he worked for the BBC before being recruited by the British Foreign Office in 1941. By 1950 he was handling sensitive documents at the British Embassy in Washington, D.C. with MacLean and Philby. Warned by Philby that British intelligence agents were closing in on MacLean, Burgess disappeared with MacLean in 1951. He resurfaced in the U.S.S.R. in 1956 and his espionage was confirmed. Never able to adapt to life in Moscow, he died in 1963 at the age of 52.