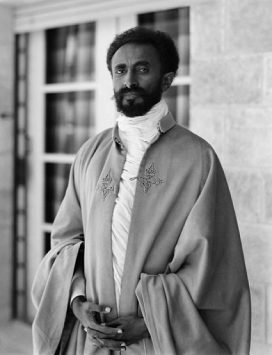 Regent to the Empress Zauditu from 1916, Ras (Prince) Tafari Makonnen succeeded her to the throne of Ethiopia in 1930, proclaiming himself Haile Selassie (“Might of the Trinity”).

Haile Selassie also claimed to be a direct descendant of King Solomon and the Queen of Sheba, and is the object of veneration in the religion of Rastafarianism (see also: Marcus Garvey).

An autocratic ruler, Selassie modernized Ethiopia and led the resistance against Italian invasion in 1935.

Selassie was exiled in 1936, but restored to power in 1941 with the assistance of the Allies in World War II.

By the 1970s, the region’s droughts and famines had taken their toll and Selassie began to lose popular support. He was deposed in a military coup in 1974 and died while under arrest.

His remains were found in 1992 beneath a toilet in the Imperial Palace, and in 2000 he was interred in the Trinity Cathedral in Addis Ababa.

Halie Selassie was also known as “The Lion of Judah” and “King of Kings”… He traveled with a pet chihuahua named Chicheebee.

Something in Common with Haile Selassie