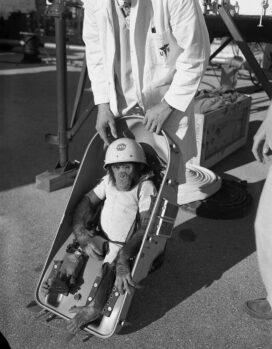 See photos of Ham the Chimp

Ham the Chimp was the first chimpanzee to be launched into space.

Ham was one of several chimpanzees specially trained by NASA rocket scientists to fly in tests of American space capsules. He was at first named simply ‘Number 65,’ and then given the name Ham as a nod to the Holloman Aerospace Medical Center in New Mexico, where he was trained for the mission.

On January 31, 1961, Ham blasted off from Cape Canaveral and traveled 157 miles in a Mercury capsule before splashing down in the Atlantic ocean. The trip took 16.5 minutes in all. The first American human astronaut, Alan Shepard, followed Ham into space three months later.

After his flight, Ham lived at the National Zoo in Washington, D.C. for 17 years before finally passing away at a zoo in North Carolina in 1983.

Ham the Chimp was not the first animal in space. That honor goes to Laika the dog, who was sent into orbit by the Soviet Union in 1957.

Something in Common with Ham the Chimp