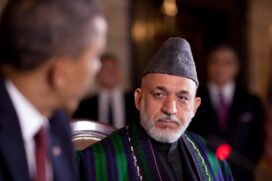 Profile and interview from the Academy of Achievement

Hamid Karzai was the president of Afghanistan from 2004-2014, and he remains a prominent figure in Afghan politics. His father was the hereditary Khan (chief) of the Popalzai tribe in the Kandahar region of Afghanistan, and Hamid Karzai studied in Kabul and Simla, India in the 1970s. During the Soviet invasion of Afghanistan in the 1980s, Karzai worked in the resistance, and after the Soviets were driven out he served as a deputy foreign minister in the re-established government (1992-94). Tense relations with the ruling Taliban led to Karzai living in exile in Pakistan in the late 1990s, but by October 2001 (following the attacks on America masterminded by Osama bin Laden in September 2001) he was back in Afghanistan, playing a key role in the Taliban’s fall from power. With help from the United States and the United Nations, Hamid Karzai stepped into the position of interim president in 2002 and began a worldwide diplomatic effort to help rebuild Afghanistan’s government. He became Afghanistan’s first popularly-elected president in September of 2004. Despite fierce political opposition and then charges of election fraud, Hamid Karzai was elected to his second five-year term in 2009. He stepped down at the end of his second term and was succeeded by Ashraf Ghani.