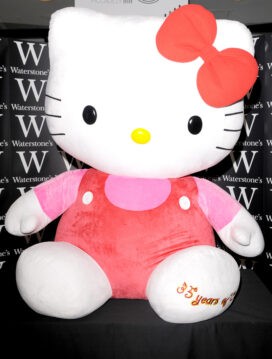 Hello Kitty is a popular cartoon character created in 1974 by the Sanrio Company of Japan. Hello Kitty is a white, mouthless female kitten who lives in a seemingly perfect world. Kind, friendly and impossibly cute, she cheerfully offers benign advice like “Hello Kitty says be yourself!” Although Sanrio had been producing Hello Kitty products since the 1970s, in the mid-1980s Hello Kitty mania swelled and she became one of the most prominent and recognizable Japanese characters on Earth, found on everything from handbags to bath towels.

According to the company’s website, other Sanrio characters include “Pochacco, our athletic young pup, and the slightly naughty Badtz Maru.”