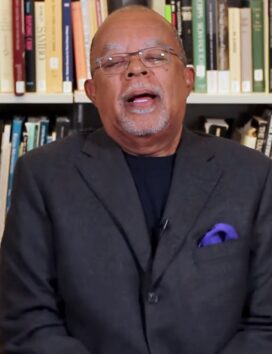 Gates has been a prominent scholar in African-American studies for decades.

He graduated from Yale with a history degree in 1973, then went on to get MA and PhD degrees from Clare College at Cambridge University in England.

Among his many books are The Signifying Monkey: A Theory of Afro-American Literary Criticism (1988), Loose Canons: Notes on the Culture Wars (1992), The Annotated Uncle Tom’s Cabin (2006), and Colored People, his 1994 memoir about his childhood in West Virginia.

Gates has written often for The New Yorker, Time and other magazines and been the editor of The Root, an online magazine. He was given a “genius” grant by the MacArthur Foundation in 1991.

Gates’s nickname is “Skip”… Gates attended Cambridge after graduating from Yale, but didn’t formally receive his MA and PhD until 1979… Gates said in a 2009 interview that he is 5’7” tall… Gates walks with a cane due to a fractured hip joint at age 14 that left his right leg shorter than his left…Despite his many books and achievements, Gates is best known to some for a much-talked-about arrest on 16 July 2009. Police, after responding to a mistaken burglary call from a passerby, arrested Gates at his home near Harvard in Cambridge, Massachusetts and charged him with disorderly conduct. The charge was dropped the next day, but the incident led to an explosion of public discussion (and angry arguments) in the national media. Eventually President Barack Obama invited Gates and the arresting officer, Sgt. James Crowley, to discuss the incident over a beer at the White House.

Something in Common with Henry Louis Gates, Jr.