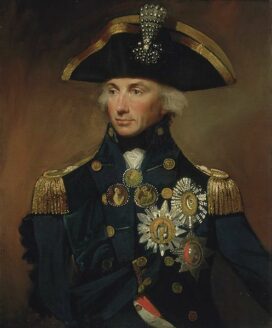 Admiral Horatio Nelson is the greatest hero in British naval history, an honor he earned by defeating Napoleon‘s fleet in the 1805 Battle of Trafalgar. Horation Nelson entered the Royal Navy at age 12 and commanded his first vessel at age 20. At first his aggressive and unorthodox tactics earned him as many insults as praise, but as he won victory after victory he became a popular hero. Nelson lost the sight in his right eye during the Siege of Calvi in 1794, and his right arm was amputated after it was shattered by gunfire during the battle of Santa Cruz at the island of Tenerife in 1797. Nelson was knighted in 1797, given the rank of Rear-Admiral the same year, and made Viscount Nelson in 1801. He began a notorious affair with a married beauty, Lady Emma Hamilton, in 1799; she bore him a daughter, Horatia, in 1801. Horatio Nelson’s most famous victory was also his undoing: while whipping the French fleet at Trafalgar, he was mortally wounded on the deck of his ship HMS Victory. His body was returned to England and he received a hero’s burial in St. Paul’s Cathedral. A statue of Nelson was erected on the top of a great column in London’s Trafalgar Square, where it remains to this day.

Just before the battle of Trafalgar, Admiral Nelson sent a famous signal to his fleet: “England expects every man will do his duty”… Nelson’s own last words were “Thank God I have done my duty”… Because of the distance from Trafalgar to England, Nelson’s body was placed in a cask of brandy to preserve it for the trip.

Something in Common with Horatio Nelson