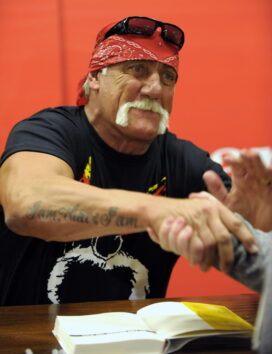 Hulk Hogan is the stage name of Terry Bollea, one of the superstars of professional wrestling from its 1980s heyday. Bollea joined the World Wrestling Federation in 1979. His rise in the ring coincided with the expansion of the WWF, and Hogan became a star through live events and pay-per-view television. His career got a big boost early on from an appearance with Sylvester Stallone in the movie Rocky III (1983), and by the late ’80s “Hulkamania” was in full swing. Hogan was headlined live events like Wrestlemania and became an all-around TV celebrity on talk shows and MTV. Easily recognized by his extra-large frame, long white hair and handlebar mustache, Hogan’s trademarks included feather boas, torn shirts and leg drops. While with the WWF (later World Wrestling Entertainment), Hogan secured five heavyweight titles between 1984 and 1993. He joined World Championship Wrestling in 1994 and changed his persona from good guy to heel. While with the WCW Hogan earned six heavyweight titles (1994-99). He returned to the WWF/WWE in 2002, grabbed his sixth title and revived his multimedia celebrity. In 2005 he and his family debuted in a reality-based television series, Hogan Knows Best, and in 2008 he began serving as the host of NBC’s revived American Gladiators series.

Something in Common with Hulk Hogan